Bournemouth spit their dummy out

RustyRef said:
There is a very simple answer / response here. The next time Dan Gosling shows any kind of dissent, don't talk to him just shove a yellow card at him, and when he inevitably does it again show him another one.

I've been on the wrong side of this before, where a player has had a moan at me, I've made a sarky and put down comment back, player has complained to his manager and I've been reported. If you can't take it back don't dish it out.
Click to expand...

Yep. Been there. I still see and referee some of these players. They are quiet as a mouse when on my field.
For some of them their true nature slowly creeps back in but they get back in line again once they see a yellow.

But unfortunately as @Justylove explained, EPL referees don't have the luxury of using cards freely for events that can be managed. If MD or any other referee cards him for dissent anytime soon, everyone would call it a revenge attack. Damned if you...

Sheffields Finest said:
The players used to see my posh 4 x 4 car pulling up and a few players would joke that how come a parks ref could afford such nice wheels!!!! I'd explain that the FA gave a cash bonus at the end of the season on the ref with the most cards and i'd won it a few years running so i bought it cash..... Some of the mugs thought I was actually serious LOFL!!!
Click to expand...

Briliant. I am going to use that if you don't mind.

one said:
Briliant. I am going to use that if you don't mind.
Click to expand...

Is similar to the “you’re not putting that booking through are you?” - “of course, you lot pay for our annual night out” which was a local favourite

Level 5 Referee
Snowflake footballers lose game and then complain about how the referee hurt their feelings.

Level 7 Referee
If a player moans that you’ve got a lot wrong, tell him that your manager demanded consistency before the game!

QuaverRef said:
I’m basing it on the articles posted within this thread, I’ve no looked into it further as I saw it was dropped but I’m actually talking about the bigger picture and refereeing as a whole. We have tools at are disposal to deal with dissent, in what way does making comments about players or their team help? It’s only going to antagonise them further
Click to expand...

Premier League referees have them tools but almost certainly they are told to use them sparingly. Every week a player shouts f*** off at one of them from 5 yards away and they do nothing, that cannot be a coincidence. The league and fans would be outraged if players got 3/4/5 cautions per game every time they screamed at the referee.

Level 3 Referee
Check out the pundits on ESPNFC. They got this one 100% right--except, of course, for the fat one who has never played.
P

This reporter claims that AFTER Bournemouth players told him that he was the reason they were in a relegation scrap - think we can all guess how THAT accusation was phrased! - JM replied 'I'm not the reason you are fighting relegation, you are'

Reporter also references Germany, It think it was - don't have the paper with me now, where they have cracked down on dissent. One player shown a yellow for dissent after a foul and then shown a 2nd yellow after dissent following the first!

'Way to go' - as our American friends would say!

Level 5 Referee
For what it's worth, I've met Jon. A nicer bloke you couldn't wish to meet (apart from being a mackem obviously

).
An experienced and knowledgeable referee with a superb sense of humour. Indeed, that was the lasting impression that he made on both myself and my referee colleagues - he saw humour in literally everything and doesn't take himself too seriously.
I find the clamour by Bournemouth FC players and some individuals to slate him for being a "character" really shocking and a rather sad indictment of the "Permanently Offended" society we live in today.
Football needs referees like Jon - both at his level and ours. 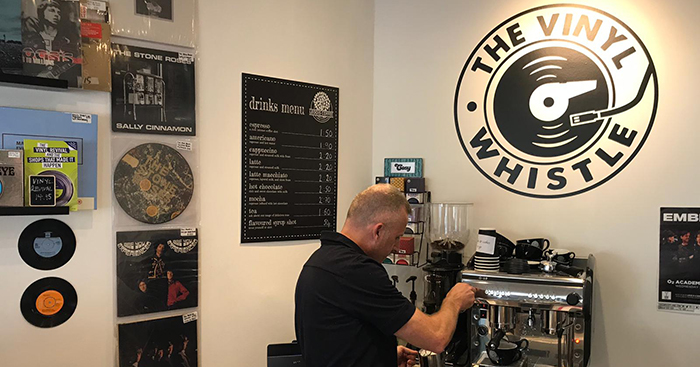 Newsflash! PL ref Jon Moss is in a band and has opened a record shop in Leeds - Planet Football

When I tell people that Premier League referee Jon Moss has a record shop in Headingley called ‘Vinyl Whistle’, the first reaction is “really!” followed by “great name”.

Seems a grounded down to earth guy!!
S

JH said:
Premier League referees have them tools but almost certainly they are told to use them sparingly. Every week a player shouts f*** off at one of them from 5 yards away and they do nothing, that cannot be a coincidence. The league and fans would be outraged if players got 3/4/5 cautions per game every time they screamed at the referee.
Click to expand...

This is one of those false narratives that drives me nuts. Players yell F you in the face of refs because they know they won't be sanctioned. They aren't stupid. If the EPL told teams before the season that referees had been instructed to actually give the cautions (or send offs) and that the referees were going to be evaluated on following that instruction, the behavior would change. Might take a few pieces of plastic and the league backing those cautions but once the standard was established, dissent would (very largely) drift into the kinds of behavior that wasn't being cautioned. Actions of referees, supported by the league, can radically change behavior.* It's the culture of acceptance that makes the behavior change--and FIFA and the leagues, despite their sanctimonious pronouncements, don't actually care enough to take the steps to make the changes take place.

________
*There are lots of examples out there. How fast did the WWC adapt to the micromanagement of coming off the line? In the NBA, its an auto-ejection for bumping the ref while arguing so it almost never happens.

Level 7 Referee
I can assure you that at Grassroots, Leagues very much back referees up in the matter of dissent. A lot of Leagues don't have enough refs and treat them like gold dust. Why wouldn't they back refs?

The simple fact is that Disciplinary is taken out of their hands. CFAs have that duty but also they then have procedures that allow appeals etc that can draw matters out and dilute the outcome.
The most a League can do is invite the team in for a telling off and probably exempt them from their Fair Play award at the end of a season.

Yes it doesn't help that at the higher levels certain behaviour is tolerated but that's because it's a paid for event and one where a referee has a twisted responsibility to keep stars on the pitch. What matters to me though is how I am treated on a Saturday and that ultimately is in my hands.

What could actually be useful is that referees universally issue cautions for specific behaviour /words. Another current thread on here shows how inconsistent we can be in clamping down on lip.

Kes said:
I find the clamour by Bournemouth FC players and some individuals to slate him for being a "character" really shocking and a rather sad indictment of the "Permanently Offended" society we live in today.
Click to expand...

Bet you my house that they're the first to moan that you can't talk to refs these days, and there's no characters like the good old days. 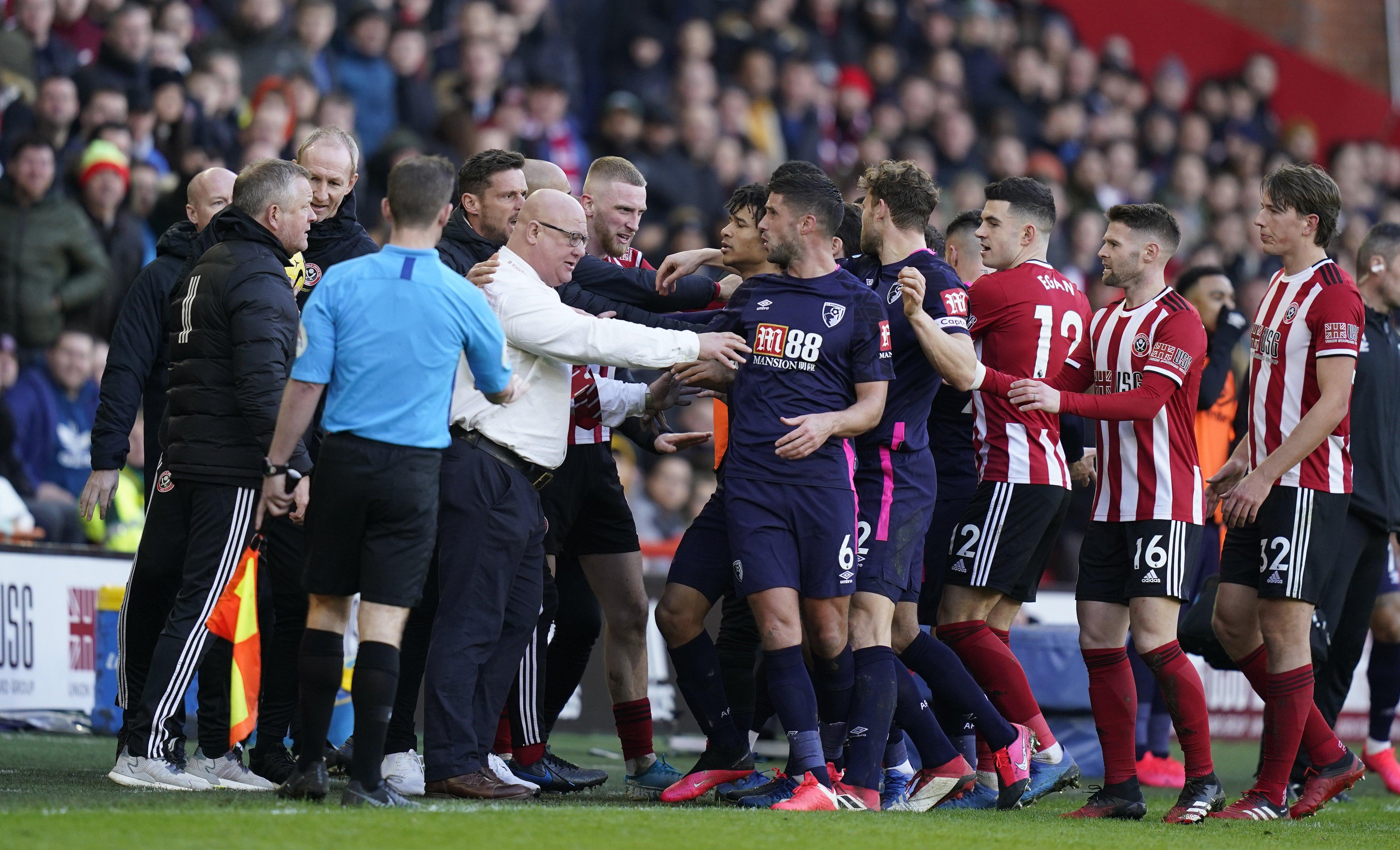 James Shield: AFC Bournemouth players have a cheek to talk about 'respect' after Sheffield United match

I think he was taking the Michael. Well, I definitely hope he was.Because if Dan Gosling really believes Jonathan Moss showed AFC Bournemouth zero respect during their defeat at Sheffield United, then he needs to step outside of the glasshouse and stop throwing stones.

Grayson said:
Bet you my house that they're the first to moan that you can't talk to refs these days, and there's no characters like the good old days.
Click to expand...

Nah they wouldn't do that mate - cos that would make them the same as every other team ..
R

Staff member
This was discussed at length on Premier League Tonight on BT Sport tonight. Steve Mcmanaman, Paul Ince and Robbie Savage all agreed that Dan Gosling has massively over reacted and that they used to like getting banter back from referees. Really good debate, with Peter Walton involved, and all of the ex-players recognised how hard it is to be a referee and that they have to be cut come slack.
R

PinnerPaul said:
Reporter also references Germany, It think it was - don't have the paper with me now, where they have cracked down on dissent. One player shown a yellow for dissent after a foul and then shown a 2nd yellow after dissent following the first!
Click to expand...

If you follow RefereesTales over on Twitter, he's based in Germany I think? He did a blog post recently, something to do with Germany clamping down on dissent at top flight level because they're linking it with the rise in violence against referees at grassroots. (https://refereetales.blogspot.com/2020/02/finally-leadership-from-top-on-dissent.html)